PvP in FFXIV: A Realm Reborn will come in two forms; The Wolves' Den and Frontlines. These are dedicated PvP areas and you will not be able to PvP outside of them. Unlike in certain other MMORPGs players will not be forced to take part in PvP if they don't want to. It is easily possible to play FFXIV: ARR and completely ignore PvP if it is just not for you, but for those who are into PvP the system will have plenty to offer.


The Wolves' Den was implemented in patch 2.1 and can be accessed via the the ferry at Moraby Drydocks (X:32, Y:16) in Lower La Noscea. To get there you need to first complete the quest "A Pup No Longer" with your Grand Company and then speak to the ferry skipper at Moraby Drydocks. The PvP area exists as the result of a geographic anomaly created during the end of the Sixth Astral Era. The inside has been converted to an arena and it is accessed via a ship as the arena is actually floating on the sea.

The Wolves' Den is a more relaxed form of PvP and is more akin to sport than the player killing you would normally find in a PvP system. The type of battles you can expect in here are in small groups, IE 4 players vs. 4 opponents. The battles are designed for levels 30, 40 and 50 and last for up to 30 minutes. In reality the battles will be much shorter. The arena is not just a flat area; it will contain stairs, pillars and other obstacles that can be used to your advantage.


Frontline was added in patch 2.3 and takes place in an area called The Carteneau Flats: Borderland Ruins. Frontline is designed for large scale PvP battles and features epic battles between the three city-states of Gridania, Limsa Lominsa and Ul'dah as they battle for control over some newly discovered ancient ruins and the secrets within. Unlike The Wolves' Den you will be open to attack as long as you are in the zone; if you are in it then you are part of the battle. 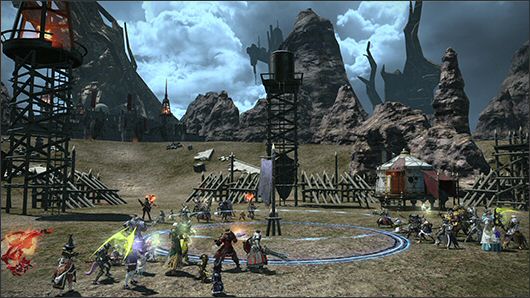 Frontline contains up to 72 players in each battle, divided into three alliances of 24 players. Teamwork is very important for winning this since a scattered party is going to get picked off one by one. The goal of Frontline is to achieve a tactical rating of around 1600 points. This is achieved through defeating other players, defeating monsters and by occupying key locations such as outposts on the map. Players must fight to keep control of the locations so that their tactical rating continues to increase.

Below is a map of The Carteneau Flats: Borderland Ruins. 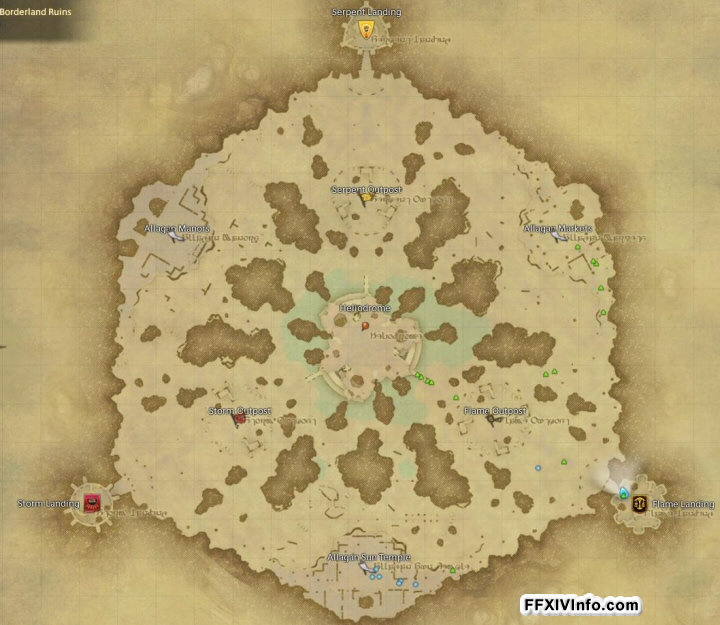 
When you win a PvP match in FFXIV: ARR you will be awarded a number of Action Points. These Action Points will unlock higher ranks and higher tiers of points. With these points you will be able to purchase PvP equipment to improve your performance on the battle field. PvP has a special stat called Morale which determines the amount of damage you take and give out, which makes the PvP equipment very important.

Another thing you can spend your Action Points on are new abilities and traits. These can only be used in PvP battles and they are highly useful. You can also enhance them with more Action Points to make their potencies stronger. A full list of PvP actions and traits are below.


It has been said that participants in PvP will still take fall damage as usual, so players will have to think before jumping from heights to get away.

Further down the line Square Enix plan to have a spectator feature whereby players who are not competing can view the camera of participants.

Lodestone: Moogle Treasure Festival 2021 – The Hunt for Pageantry Commences May 14!

Lodestone: The Uznair Challenge Begins May 14!

Lodestone: Game Better with Butterfinger® and Score the Chocorpokkur Mount