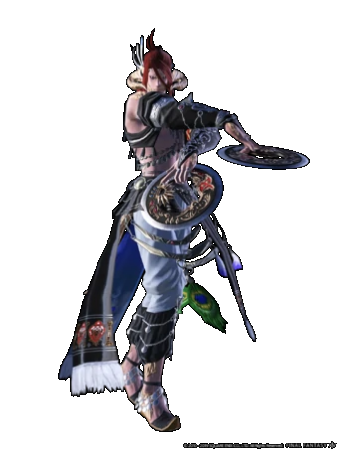 From the Near Eastern nation of Thavnair comes a troupe of bewitchingly graceful performers. Though certainly elegant and beautiful, their movements also speak of martial discipline─of a pulsing, persistent energy whose rhythm can inspire souls and soothe troubled hearts.

Inured to the hardships of the road, these dancers have learned to land throwing weapons with the same exacting precision as their footfalls, removing any who would obstruct the endless beat of the dance.


Dancer was added at the start of the Shadowbringers expansion and begins at level 60. The job also has no corresponding class so all abilities earned are on the job itself. In order to become a Dancer you must complete the following quest.


Dancer is a tank job which uses defensive tactics to hold enmity. It is still capable of dealing decent damage however this should not be your main priority - you should always focus on defense before offense.


Actions are skills that the Dancer can equip to their bar and select to use at any time as long as their timer is available. Actions used in a combo will generate additional damage and effects. All Dancer actions are exclusive to that job.

As well as these the Dancer can also equip actions.


Since the Shadowbringers expansion for FFXIV, cross class actions were removed and replaced with the concept of "role" actions. Role actions are more generic as they don't belong to specific classes, but instead to roles such as melee DPS, magic DPS, healer or tank. The Dancer can equip up to 5 of these.


From the Stormblood expansion PvP was revamped significantly and you can no longer use PvE actions during PvP battles. That means all of the actions above you can no longer use in PvP. Action Points (AP) were also removed. While some of the dedicated PvP actions do have the same name, they will have different potencies or effects. Below are the PvP actions that are unique to the Dancer. There exists even more PvP actions and even traits but these are not unique to the Dancer. You can find these further down the page.


The best equipment for your Dancer constantly changes depending on what was added in the latest patch so it is important to do your own research on top of this guide. We have broken the equipment down into tiers in order to give some indication of what you can use before you get up to that item level tier.