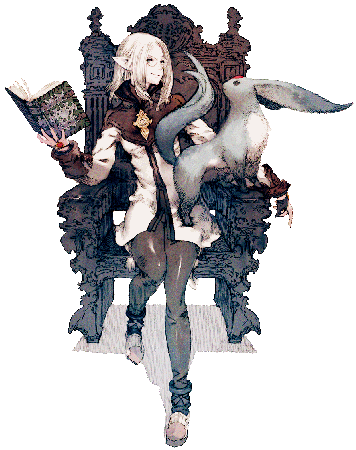 The Arcanist class has been announced to be a new magic based class with a focus on crowd control and support abilities. The class will make its debut at the launch of FFXIV: A Realm Reborn.

Adepts of the art of arcanum derive their might from symbols of power born of geometric techniques hailing from across the southern seas. Held within occult grimoires, these symbols lend shape to the arcanist's aether, thereby allowing him to produce myriad powerful spells.

Using the selfsame symbols to unlock the latent power contained within gemstones, arcanists are also able to summon forth the familiar known as Carbuncle to carry out their bidding.

By completting quests the Arcanist can become a Summoner and a Scholar. Summoner will give it access to miniature primals to summon called Egis while scholar will have a fairy pet.

As an Arcanist you should be focusing on INT as this increases magic attack power.


Actions are skills that the Arcanist can equip to their bar and select to use at any time as long as their timer is available. Actions used in a combo will generate additional damage and effects. All Arcanist actions are exclusive to that job.


The Arcanist has access to a unique set of actions for controlling their pets. These are listed below.


Traits are not actions and can not be equipped to your bar. They are earned as you level up and are always active. As a result they require 0 cast time and have a 0 MP and TP cost. They are also all exclusive to the arcanist class and its jobs Summoner and Scholar.


Since the Stormblood expansion for FFXIV, cross class actions were removed and replaced with the concept of "role" actions. Role actions are more generic as they don't belong to specific classes, but instead to roles such as melee DPS, magic DPS, healer or tank. The Arcanist can equip up to 10 of these.