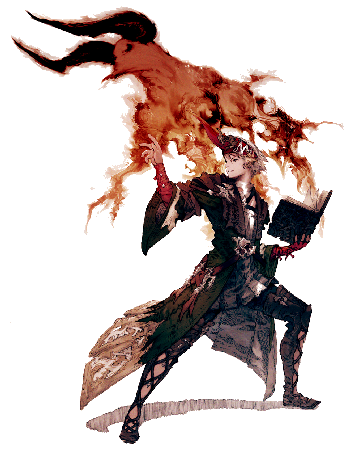 The beast tribes of Eorzea worship and summon forth beings known as primals, among which are Ifrit, Garuda, and Titan. Yet what is a god to one man is a demon to another, for the city-states of Eorzea see these beings as a grave threat to their collective survival.
In times immemorial, there lived mages who had not only the power to summon the primals, but also the means to transmute the primals' essences, thus binding them to their will. Known simply as summoners, the existence of these men and women and their arcane art have been all but lost to the ages.


Summoner is a new job in FFXIV: A Realm Reborn and very little is known about it as of yet. It is known that Summoner will have miniature versions of the primals called Egis. Stay tuned for more details on abilities, traits, materia and equipment.


An Arcanist can become a Summoner by equipping the Soul of the Summoner item after completing the first quest. The details for this quest are below.


The Summoner is a classic magic damage dealing job making use of the power of primals to boost their damage. Damage over time skills are also highly important for the summoner as this is where a lot of their damage will come from.


The summoner job is able to control various summons (egis) and you will have one out at all times. It is important to understand the differences between them. Currently only Ifrit, Titan, Garuda and Bahamut are available and they all serve different purposes as they belong to different roles.
Ifrit is a melee damage dealer and will be found up front in battle, he is best at single target fights.
Garuda is a caster and will keep her distance, she is best with multiple target fights.
Titan is a tank and you should almost never have him out in party play. He is there to absorb damage when you are soloing.
Bahamut is a powerful attacker that can be used under Dreadwyrm mode.


Actions are skills that the Summoner can equip to their bar and select to use at any time as long as their timer is available. Actions used in a combo will generate additional damage and effects. All Summoner actions are exclusive to that job.

As well as these the Summoner can also equip Arcanist actions.


The Summoner has access to a unique set of actions for controlling their pets. These are listed below.


Since the A Realm Reborn expansion for FFXIV, cross class actions were removed and replaced with the concept of "role" actions. Role actions are more generic as they don't belong to specific classes, but instead to roles such as melee DPS, magic DPS, healer or tank. The Summoner can equip up to 5 of these.


From the Stormblood expansion PvP was revamped significantly and you can no longer use PvE actions during PvP battles. That means all of the actions above you can no longer use in PvP. Action Points (AP) were also removed. While some of the dedicated PvP actions do have the same name, they will have different potencies or effects. Below are the PvP actions that are unique to the Summoner. There exists even more PvP actions and even traits but these are not unique to the Summoner. You can find these further down the page.


The best equipment for your Summoner constantly changes depending on what was added in the latest patch so it is important to do your own research on top of this guide. We have broken the equipment down into tiers in order to give some indication of what you can use before you get up to that item level tier.