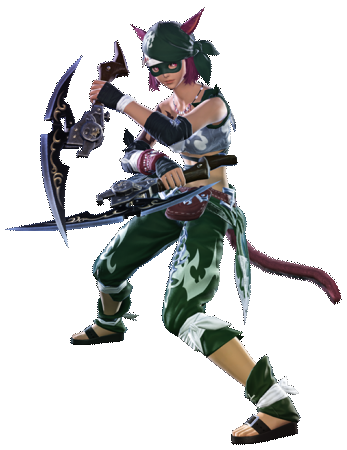 These agile fighters pride themselves on their skills with knives and daggers to make quick work of enemies.

Lurking in the shadows, adhering to no laws but their own, they punish the wicked, pilfering their ill-gotten gains and delivering them to the downtrodden masses. Thought by many to be mere common criminals, some would say they play an unseen hand in maintaining order in the buccaneer's haven of Limsa Lominsa.

Rogue was added in patch 2.4 of FFXIV: ARR along with its job Ninja, which can be obtained by completing quests.

As a Rogue you should be focusing on DEX as this increases attack power by Rogues and Ninjas.


Actions are skills that the Rogue can equip to their bar and select to use at any time as long as their timer is available. Actions used in a combo will generate additional damage and effects. All Rogue actions are exclusive to that job.


The Rogue class has the following combos which can be executed. These will give extra damage and effects.


Traits are not actions and can not be equipped to your bar. They are earned as you level up and are always active. As a result they require 0 cast time and have a 0 MP and TP cost. They are also all exclusive to the Rogue class and its job Ninja.


Since the Stormblood expansion for FFXIV, cross class actions were removed and replaced with the concept of "role" actions. Role actions are more generic as they don't belong to specific classes, but instead to roles such as melee DPS, magic DPS, healer or tank. The Rogue can equip up to 10 of these.