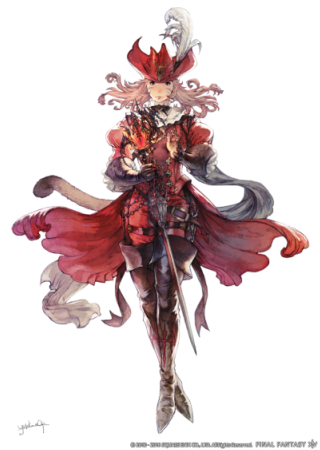 On the eastern edge of Abalathia's Spine lies the mountainous region of Gyr Abania.

It is in these elevated lands that people took shelter, when a burning star guided them away from the Sixth Umbral Calamity's treacherous floodwaters. The survivors gathered from near and far, and amongst them were refugees of the sorcerous cities of Mhach and Amdapor.
These sworn enemies buried their history for the sake of the future, and cast aside their vestments of black and white. Upon the remnants of their arts a new discipline was built, and the first red mages stepped forward with rapiers in hand to fight back against the rising tides of destruction.


Red Mage was added at the start of the Stormblood expansion and begins at level 50. The job also has no corresponding class so all abilities earned are on the job itself. In order to become a Red Mage you must complete the following quest.


The Red Mage is a classic magic damage dealing job that makes use of both black and white magic. Primarily an attacker, they also have the ability to heal when necessary.


Actions are skills that the Red Mage can equip to their bar and select to use at any time as long as their timer is available. Actions used in a combo will generate additional damage and effects. All Red Mage actions are exclusive to that job.


Traits are not actions and can not be equipped to your bar. They are earned as you level up and are always active. As a result they require 0 cast time and have a 0 MP and TP cost. They are also all exclusive to the Red Mage job.


Since the Stormblood expansion for FFXIV, cross class actions were removed and replaced with the concept of "role" actions. Role actions are more generic as they don't belong to specific classes, but instead to roles such as melee DPS, magic DPS, healer or tank. The Red Mage can equip up to 5 of these.


From the Stormblood expansion PvP was revamped significantly and you can no longer use PvE actions during PvP battles. That means all of the actions above you can no longer use in PvP. Action Points (AP) were also removed. While some of the dedicated PvP actions do have the same name, they will have different potencies or effects. Below are the PvP actions that are unique to the Red Mage. There exists even more PvP actions and even traits but these are not unique to the Red Mage. You can find these further down the page.


The best equipment for your Red Mage constantly changes depending on what was added in the latest patch so it is important to do your own research on top of this guide. We have broken the equipment down into tiers in order to give some indication of what you can use before you get up to that item level tier.