Phase 2 began on April 5th 2013 and the main focus of this test was the gamepad controls. This phase lasted 4 weeks.

Phase 3 of the beta began on June 14th 2013 and was the first test where the PS3 version could be played. The phase brought about the regions of Thanalan and La Noscea as well as new dungeons, more quests and the ability to import your version 1 character if you have one. Progress is not saved during phase 3.

Phase 4 of the beta is an open beta and will officially begin on August 17th 2013, with phase 3 testers given access on August 16th. The phase will last until August 19 and this will mark the end of the beta. Following on from that will be Early Access on August 23rd and release day on August 27th.

On January 7th 2013, applications for the FFXIV: A Realm Reborn beta began. You can submit an application at either the North American or European beta websites depending on your location. There are a few things to note however: On December 26th 2012 Square Enix announced the beta test schedule, detailing everything you could want to know about Beta testing FFXIV: A Realm Reborn. 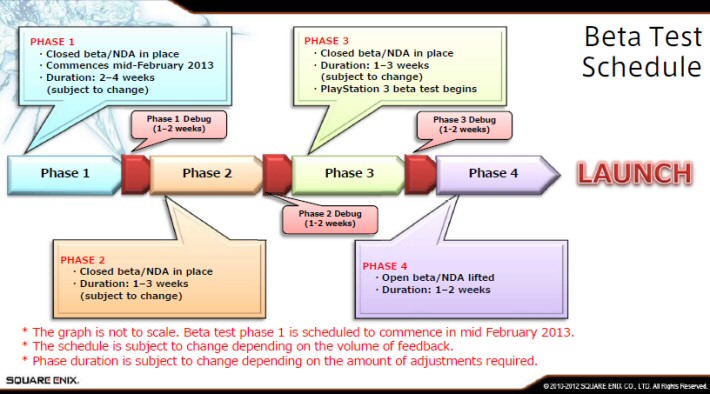 The above is a screenshot from the roadmap PDF that can be found here. The main things to note from the PDF are that:


Phase 1 of the beta begins in mid-February 2012 and will last 2-4 weeks. The purpose of this test is for core systems rebalancing and this includes testing part of the main scenario, sidequests, class quests, FATE (Full Active Time Event), behests, dungeons, cutscenes, hunting logs, player search, markets and item search, and full damage testing. There will be 5-10 worlds available and players can select from all races and genders. A level cap of 35 will be in place.


Phase 2 begins 1-2 weeks after phase 1 ends and will last 1-3 weeks. The purpose of this test is for gamepad controls. However there will be more content to test too such as the Grand Companies, private chocobos, more quests and more FATE events. There will be an extra 5 worlds available for this test.


Phase 3 begins 1-2 weeks after phase 1 ends and will last 1-3 weeks. The purpose of this test is for version 1.0 character import testing, which means players will be able to use their V1 character. This will also be the first time in the beta that players are able to visit Limsa Lominsa and Ul'dah and their surrounding areas. Free companies will be added along with limit breaks and materia crafting. On the system side this will be the first time data centers are available outside Japan. There will be over 20 worlds available and the level cap may be increased from 35 to 50.


Phase 4 is an open beta and begins 1-2 weeks after phase 1 ends. This will last 1-2 weeks and anyone will be able to play. Characters created during this phase will carry over to the official launch unless there is a major bug. Content added in this phase include the duty finder, level sync, housing system stress testing and the PvP coliseum. Early access between the open beta and the official launch may be offered and version 1.0 account holders will be allowed to download the retail client for A Realm Reborn for free.


Patch 1.23 and its letter sub patches marked the end of FFXIV V1, with the finale occuring on November 2012. Though it was not until December 31st that the servers closed down forever. Meanwhile, alpha testing of FFXIV: A Realm Reborn had begun towards the end of October in Japan with worldwide testing beginning a few weeks later. This was a bit later than planned as Yoshida originally wanted to begin alpha testing in September 2012. The alpha testing lasted until the final week of December 2012.

The purpose of the alpha test phase was to stress test the servers. Basically Square Enix wanted to know how the servers perform under heavy loads. The goal is to successfully support up to 1000 characters, NPCs and monsters in a single zone. The alpha contained very little content because this was not the purpose of the testing, and players were restricted to the Gridania and Black Shroud areas with a level cap of 20. The testing was originally scheduled for a few hours per day, a few days per week on one server until it eventually ran 24/7 across three servers.


On December 16th 2009, Square Enix started taking applications for the beta. Applications were for both the PC and PS3 versions but only the PC version was going to be tested. Early participants were given a beta key and access to the alpha test. The alpha phase of the testing was conducted in small groups participating in 3-4 hour tests to see how the game performed. Alpha testing for the original version finished around the end of June 2010, with beta testing beginning in early July.

The beta testing involved holding weekly 24 hour tests to help stabilise the servers. The third phase of the beta started on August 11th 2010 and was the final phase of the closed beta. After this an open beta took place, with very little changing between this and the game's release. The deadline for closed beta applications was August 16th 2010. With September 2010 came the open beta, where anyone could sign up, get a beta key and play.

The beta stage was originally estimated to last around six months, but with the game announced as a September 22nd/30th 2010 release date it seemed the game was either rushed out the door or this estimate included the alpha. We think it was a combination of both due to the problems encountered after the game's launch.

The PS3 version was delayed in a big announcement on December 12th which also announced a change in the development team and a further free trial extention. The game remained free to play until January 6th 2012, with still no signs of a PS3 beta. The PS3 beta will eventually take place for V2 of FFXIV, while V1 will never see a release on the console. After this came the beta, where the plan was to hold weekly 24 hour tests after stabilising the servers.
Comments