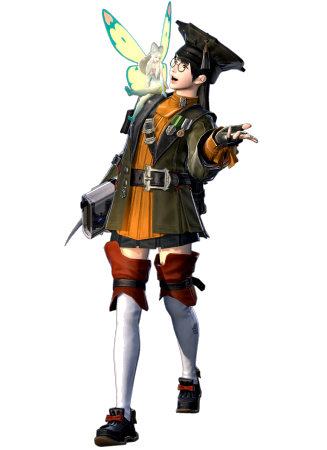 In an age long past, when mankind flourished under the radiance of arcane mastery, the island of Vylbrand was home to a city-state called Nym. Though the history of that age tells of countless wars waged with earth-shattering incantations, it was the brilliant strategic maneuvering of Nym's scholars that allowed their mundane army of mariners to throw back would-be conquerers time and again.
These learned men and women defended the freedom of their tiny nation with their unique command over spell-weaving faeries, utilizing the creatures' magicks to heal the wounded and bolster the strength of their allies.


Scholar is a new job in FFXIV: A Realm Reborn and very little is known about it as of yet. It is known that Scholar will have a Fairy pet and be more towards healing. Stay tuned for more details on abilities, traits, materia and equipment.


An Arcanist can become a Scholar by equipping the Soul of the Scholar item after completing the first quest. The details for this quest are below.


Scholar is a healing job that branches off Arcanist. Its role is to restore the HP of party members that take damage from monsters, cure bad status effects from party members and to revive fallen members of the party upon death. The Scholar can also deal damage with DoTs just like Arcanist and Summoner but this should be seen as secondary to everything else.


There are two types of fairies; a healer and a support type. Eos is the healer and Selene is for support. Most of the time you will use Eos to aid with your healing. She also has an ability called Whispering Dawn which gives a regen effect. You should be manually using this ability when it is needed rather than leaving it up to the pet.

Selene is more useful when the Scholar does not need the additional healing from Eos, for example when clearing trash monsters in a dungeon. The spell/skill speed buffs will help out more.


Actions are skills that the Scholar can equip to their bar and select to use at any time as long as their timer is available. Actions used in a combo will generate additional damage and effects. All Scholar actions are exclusive to that job.

As well as these the Scholar can also equip Arcanist actions.


The Scholar has access to a unique set of actions for controlling their pets. These are listed below.


Since the A Realm Reborn expansion for FFXIV, cross class actions were removed and replaced with the concept of "role" actions. Role actions are more generic as they don't belong to specific classes, but instead to roles such as melee DPS, magic DPS, healer or tank. The Scholar can equip up to 5 of these.


From the Stormblood expansion PvP was revamped significantly and you can no longer use PvE actions during PvP battles. That means all of the actions above you can no longer use in PvP. Action Points (AP) were also removed. While some of the dedicated PvP actions do have the same name, they will have different potencies or effects. Below are the PvP actions that are unique to the Scholar. There exists even more PvP actions and even traits but these are not unique to the Scholar. You can find these further down the page.


The best equipment for your Scholar constantly changes depending on what was added in the latest patch so it is important to do your own research on top of this guide. We have broken the equipment down into tiers in order to give some indication of what you can use before you get up to that item level tier.