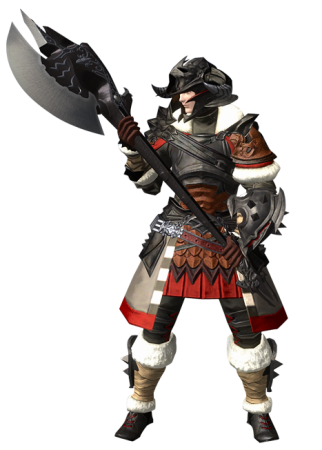 On the northernmost edge of Ablathia's Spine, nestled between ageless spires of lime and granite can be found a small Hellsguard village, all but forgotten by time. However, it was not long ago that this isolated hamlet gendered countless fighters, trained to harness their inner-beasts and translate that power to unbridled savagery on the battlefield.
This art was known as the Way of the Warrior, and those who followed its teachings were eagerly sought by mercenary troupes, who, in turn, were sought by the warring city-states of the era.

Impressed by the warriors' prowess in combat, city-state armies soon began incorporating the ancient Hellsguard art in their training regimens, thus accelerating the proliferation of the fighting style throughout the whole of the realm.

Unfortunately, as the keepers of the art passed away or were slain in battle, so too did the Way of the Warrior fade, descending once more into the shadows of obscurity, where it remains to this day.


Patch 1.21 saw the introduction of jobs to FFXIV, which allows you to become one of the traditional jobs from the FF series after completing a quest. A Marauder can become a Warrior by equipping the Soul of the Warrior item after completing the first quest. The details for this quest are below.


Warrior is a tank job capable of holding enmity through high damage output. While it can function as a damage dealing job its primary role in battle will be to tank so that you are not forced to bring a Paladin to every party. The job branches off the Marauder class.


As a Warrior your main stat is Vitality (VIT) as this increases your HP and allows you to survive big attacks from bosses. You should be focusing on equipment with this stat. It is also worth looking at equipment with Strength (STR) to increase your damage and the percentage of damage mitigated by parry as this will be useful in boss fights.


Actions are skills that the Warrior can equip to their bar and select to use at any time as long as their timer is available. Actions used in a combo will generate additional damage and effects. All Warrior actions are exclusive to that job.

As well as these the Warrior can also equip Marauder actions.


The Warrior job has the following combos which can be executed. These will give extra damage and effects.


Since the A Realm Reborn expansion for FFXIV, cross class actions were removed and replaced with the concept of "role" actions. Role actions are more generic as they don't belong to specific classes, but instead to roles such as melee DPS, magic DPS, healer or tank. The Warrior can equip up to 5 of these.


From the Stormblood expansion PvP was revamped significantly and you can no longer use PvE actions during PvP battles. That means all of the actions above you can no longer use in PvP. Action Points (AP) were also removed. While some of the dedicated PvP actions do have the same name, they will have different potencies or effects. Below are the PvP actions that are unique to the Warrior. There exists even more PvP actions and even traits but these are not unique to the Warrior. You can find these further down the page.


The best equipment for your Warrior constantly changes depending on what was added in the latest patch so it is important to do your own research on top of this guide. We have broken the equipment down into tiers in order to give some indication of what you can use before you get up to that item level tier.