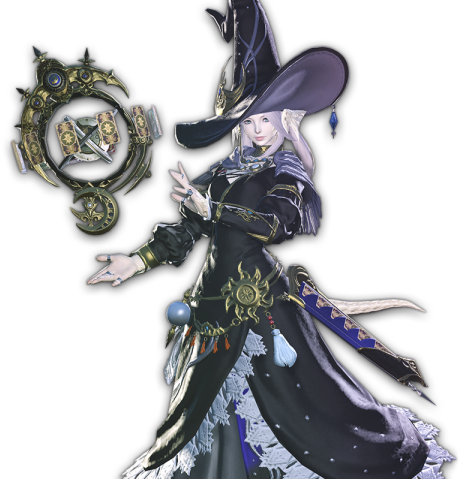 Ever has man coveted knowledge, and none more so than that of his fate. Thus did he labor to master the skill of foresight - but initial efforts bore little fruit. That is, until he looked to the stars above, which foretell the coming seasons, and learned to read the heavens.
Though this gift is known today as astrology, the people of Sharlayan saw fit to not only read the stars, but to write their movements as well. By attuning their ethereal energies to that of constellations, they learned to wield magicks with heretofore unseen properties.

Thus was astromancy born - a new form of magick which grants its users power over fate. Employing a star globe and divining deck in their miraculous deeds, fortune always smiles upon these masters of arcana.


Astrologian was added at the start of the Stormblood expansion and begins at level 50. The job also has no corresponding class so all abilities earned are on the job itself. In order to become an Astrologian you must complete the following quest.


Astrologian is a healing job with no associated class. Its role is to restore the HP of party members that take damage from monsters, cure bad status effects from party members and to revive fallen members of the party upon death. The Astrologian can also deal damage with Holy, Aero and Stone but this should be seen as secondary to everything else.


Astrologian have two stances. These are called Diurnal Sect and Nocturnal Sect and the difference is that one is a healing stance similar to a WHM while the other makes use of barriers like a SCH. You can switch between them, but only outside of combat.

Depending on which stance you are in the effects of your spells will differ so it will be important to learn when best to use each stance.


Cards will play a role for the Astrologian's play style as you will be able to draw cards at random that give you one of the following effects.


Actions are skills that the Astrologian can equip to their bar and select to use at any time as long as their timer is available. Actions used in a combo will generate additional damage and effects. All Astrologian actions are exclusive to that job.


Traits are not actions and can not be equipped to your bar. They are earned as you level up and are always active. As a result they require 0 cast time and have a 0 MP and TP cost. They are also all exclusive to the Astrologian job.


Since the Stormblood expansion for FFXIV, cross class actions were removed and replaced with the concept of "role" actions. Role actions are more generic as they don't belong to specific classes, but instead to roles such as melee DPS, magic DPS, healer or tank. The Astrologian can equip up to 5 of these.


From the Stormblood expansion PvP was revamped significantly and you can no longer use PvE actions during PvP battles. That means all of the actions above you can no longer use in PvP. Action Points (AP) were also removed. While some of the dedicated PvP actions do have the same name, they will have different potencies or effects. Below are the PvP actions that are unique to the Astrologian. There exists even more PvP actions and even traits but these are not unique to the Astrologian. You can find these further down the page.


The best equipment for your Astrologian constantly changes depending on what was added in the latest patch so it is important to do your own research on top of this guide. We have broken the equipment down into tiers in order to give some indication of what you can use before you get up to that item level tier.