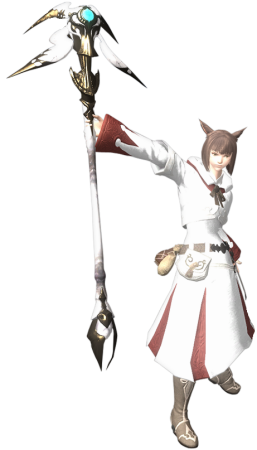 While it is commonly known that Gridania's leaders, the three Seedseer siblings, are unsurpassed in their mastery of conjury, none save a few souls are aware that they are also keepers of white magic, the arcane art of succor.
Taking healing and protection for its dominion, white magic came into existence eras past in order that the destructive force of black magic be kept in check and balance preserved.

Over time, however, even those who donned the white came to pervert their powers for the sake of personal gain, a decaying of virtue that led to the demise of the men of the Fifth Astral Era.

Though thought to have become buried in the sands of history, white magic is in the midst of revival at the hands of the Padjal, who desire that the light of succor shine throughout Eorzea.


A Conjurer can become a White Mage by equipping the Soul of the White Mage item after completing the first quest. The details for this quest are below.


White Mage is a classic healing job that branches off Conjurer. Its role is to restore the HP of party members that take damage from monsters, cure bad status effects from party members and to revive fallen members of the party upon death. The White Mage can also deal damage with Holy, Aero and Stone but this should be seen as secondary to everything else.


Actions are skills that the White Mage can equip to their bar and select to use at any time as long as their timer is available. Actions used in a combo will generate additional damage and effects. All White Mage actions are exclusive to that job.

As well as these the White Mage can also equip Conjurer actions.


Since the A Realm Reborn expansion for FFXIV, cross class actions were removed and replaced with the concept of "role" actions. Role actions are more generic as they don't belong to specific classes, but instead to roles such as melee DPS, magic DPS, healer or tank. The White Mage can equip up to 5 of these.


From the Stormblood expansion PvP was revamped significantly and you can no longer use PvE actions during PvP battles. That means all of the actions above you can no longer use in PvP. Action Points (AP) were also removed. While some of the dedicated PvP actions do have the same name, they will have different potencies or effects. Below are the PvP actions that are unique to the White Mage. There exists even more PvP actions and even traits but these are not unique to the White Mage. You can find these further down the page.


The best equipment for your White Mage constantly changes depending on what was added in the latest patch so it is important to do your own research on top of this guide. We have broken the equipment down into tiers in order to give some indication of what you can use before you get up to that item level tier.