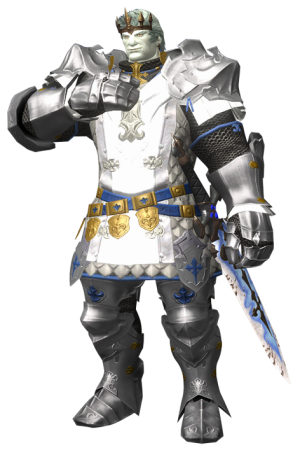 The elite of the Sultansworn bend the knee to the sultanate of Ul'dah, swearing a solemn oath to serve the nation as its sword and shield. Clad in brilliant silver armor and called paladins, these men and women were once the pride of the nation, held in high esteem by nobles and smallfolk alike.

But their glory days are no more, for as the sultanate's power waned, so too did the prestige of the paladin. They are now but a shadow of their former selves, and the sultana must needs turn to sellswords for protection.

In these troubled times, command of the Sultansworn has fallen to a young paladin named Jenlyns. Desperate to restore their honor, he has resorted to recruiting outsiders and training them in the legendary battle arts of the paladin, once a closely guarded secret.


A Gladiator can become a Paladin by equipping the Soul of the Paladin item after completing the first quest. The details for this quest are below.


Paladin is a tank job which uses defensive tactics to hold enmity. It is still capable of dealing decent damage however this should not be your main priority - you should always focus on defense before offense.


As a Paladin your main stat is Vitality (VIT) as this increases your HP and allows you to survive big attacks from bosses. You should be focusing on equipment with this stat. It is also worth looking at equipment with Strength (STR) to increase your damage and the percentage of damage mitigated by block and parry as this will be useful in boss fights.


Actions are skills that the Paladin can equip to their bar and select to use at any time as long as their timer is available. Actions used in a combo will generate additional damage and effects. All Paladin actions are exclusive to that job.

As well as these the Paladin can also equip Gladiator actions.


The Paladin job has the following combos which can be executed. These will give extra damage and effects.


Since the A Realm Reborn expansion for FFXIV, cross class actions were removed and replaced with the concept of "role" actions. Role actions are more generic as they don't belong to specific classes, but instead to roles such as melee DPS, magic DPS, healer or tank. The Paladin can equip up to 5 of these.


From the Stormblood expansion PvP was revamped significantly and you can no longer use PvE actions during PvP battles. That means all of the actions above you can no longer use in PvP. Action Points (AP) were also removed. While some of the dedicated PvP actions do have the same name, they will have different potencies or effects. Below are the PvP actions that are unique to the Paladin. There exists even more PvP actions and even traits but these are not unique to the Paladin. You can find these further down the page.


The best equipment for your Paladin constantly changes depending on what was added in the latest patch so it is important to do your own research on top of this guide. We have broken the equipment down into tiers in order to give some indication of what you can use before you get up to that item level tier.