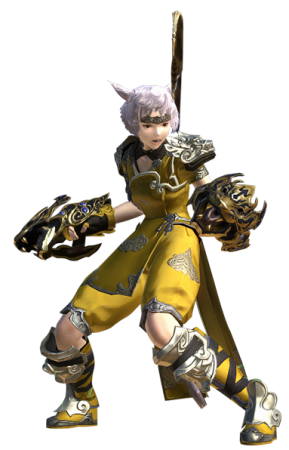 Though now under Garlean rule, the fortified city-state of Ala Mhigo once claimed dominion over the lands of Gyr Abania and boasted the greatest military might of all Eorzea. Among its standing armies were the monks?ascetic warriors dreaded by foes on the field of battle as much as the Ala Mhigan pikemen.
The monks comprised an order known as the Fist of Rhalgr, and it was to this god?the Destroyer and guardian deity of Ala Mhigo to whom they devoted their lives of fervent worship.

In their remote mountain temples, the monkhood underwent rigorous training of both mind and body, ever seeking to draw closer to the godhead of Rhalgr himself. Over the long course of its esoteric tradition, the Fist has developed a deadly and destructive martial art.

Patch 1.21 saw the introduction of jobs to FFXIV, which allows you to become one of the traditional jobs from the FF series after completing a quest. A Pugilist can become a Monk by equipping the Soul of the Monk item after completing the first quest. The details for this quest are below.

For each quest you complete, you will be rewarded with a new ability, while the latter quests will also reward you with artifact (AF) armour that is shown in the screenshot above.


Monk is a melee damage dealing job which branches from the Pugilist class. It is quite complex compared to the other damage dealing jobs and requires a lot of thought and movement to play right. Most abilities can only be used when in the right form.


As a Monk your main attribute is going to be Strength (STR) as this increases physical attack damage. You should be focusing on equipment with this stat. For secondary stats you should be focusing on the likes of Direct Hit Rate, Determination, Critical Hit Rate and Skill Speed in addition to simply boosting STR. However you'll find Skill Speed is generally not worth it.


The Monk has access to three forms, which dictate the skills they are able to use and when. Before we can get into skill rotations it is important to understand what these are and what can be used when. The three forms are called Opo-opo, Raptor and Coeurl. Each of them have three abilities and one will lead to the next form, starting with Opo-opo, on to Raptor, then Coeurl and then back to Opo-opo.

In order to use a skill from one form you must already be under the previous form, with the exception of Opo-opo as this is where you begin.


Actions are skills that the Monk can equip to their bar and select to use at any time as long as their timer is available. Actions used in a combo will generate additional damage and effects. All Monk actions are exclusive to that job.

As well as these the Monk can also equip Pugilist actions.


Since the A Realm Reborn expansion for FFXIV, cross class actions were removed and replaced with the concept of "role" actions. Role actions are more generic as they don't belong to specific classes, but instead to roles such as melee DPS, magic DPS, healer or tank. The Monk can equip up to 5 of these.


From the Stormblood expansion PvP was revamped significantly and you can no longer use PvE actions during PvP battles. That means all of the actions above you can no longer use in PvP. Action Points (AP) were also removed. While some of the dedicated PvP actions do have the same name, they will have different potencies or effects. Below are the PvP actions that are unique to the Monk. There exists even more PvP actions and even traits but these are not unique to the Monk. You can find these further down the page.


The best equipment for your Monk constantly changes depending on what was added in the latest patch so it is important to do your own research on top of this guide. We have broken the equipment down into tiers in order to give some indication of what you can use before you get up to that item level tier.