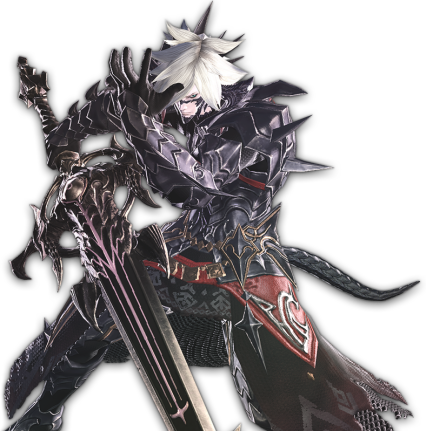 The pious Ishgardian clergy guide the flock, and the devout knights protect the weak. Yet even the holiest of men succumb to the darkest of temptations.

None dare to administer justice to these sacrosanct elite residing outside the reach of the law. Who, then, defends the feeble from the transgressions of those meant to guide and protect them?
A valiant few take up arms to defend the downtrodden, and not even the holy priests and knights can escape their judgment. Pariahs in their own land, they are known by many as “dark knights”.

These sentinels bear no shields declaring their allegiance. Instead, their great swords act as beacons to guide the meek through darkness.


Dark Knight was added at the start of the Stormblood expansion and begins at level 50. The job also has no corresponding class so all abilities earned are on the job itself. In order to become a Dark Knight you must complete the following quest.


Dark Knight is a tank job which uses defensive tactics to hold enmity. It is still capable of dealing decent damage however this should not be your main priority - you should always focus on defense before offense.


As a Dark Knight your main stat is Vitality (VIT) as this increases your HP and allows you to survive big attacks from bosses. You should be focusing on equipment with this stat. It is also worth looking at equipment with Strength (STR) to increase your damage and the percentage of damage mitigated by block and parry as this will be useful in boss fights.


Actions are skills that the Dark Knight can equip to their bar and select to use at any time as long as their timer is available. Actions used in a combo will generate additional damage and effects. All Dark Knight actions are exclusive to that job.


Traits are not actions and can not be equipped to your bar. They are earned as you level up and are always active. As a result they require 0 cast time and have a 0 MP and TP cost. They are also all exclusive to the Dark Knight job.


Since the Stormblood expansion for FFXIV, cross class actions were removed and replaced with the concept of "role" actions. Role actions are more generic as they don't belong to specific classes, but instead to roles such as melee DPS, magic DPS, healer or tank. The Dark Knight can equip up to 5 of these.


From the Stormblood expansion PvP was revamped significantly and you can no longer use PvE actions during PvP battles. That means all of the actions above you can no longer use in PvP. Action Points (AP) were also removed. While some of the dedicated PvP actions do have the same name, they will have different potencies or effects. Below are the PvP actions that are unique to the Dark Knight. There exists even more PvP actions and even traits but these are not unique to the Dark Knight. You can find these further down the page.


The best equipment for your Dark Knight constantly changes depending on what was added in the latest patch so it is important to do your own research on top of this guide. We have broken the equipment down into tiers in order to give some indication of what you can use before you get up to that item level tier.