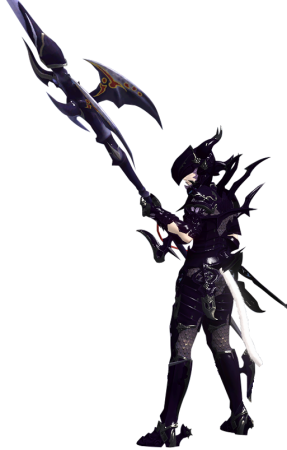 Legend holds that the dragoon tradition was born a millennium past, when the founding fathers of the great nation of Ishgard were journeying to the land promised them by the Fury. Upon arriving in Coerthas, the intrepid settlers were set upon by the great wyrm Nidhogg, the then master of that demesne, and a fierce struggle ensued.
The confrontation came to an end when a young man named Haldrath, taking up his slain sire's lance, landed a mighty thrust that prized out Nidhogg's eye, prompting his colossal adversary to take wing and flee.

From that moment forth, Haldrath became known by the epithet of the Dragonseye, and is to this day revered by all Ishgardians as the first dragoon.

Patch 1.21 saw the introduction of jobs to FFXIV, which allows you to become one of the traditional jobs from the FF series after completing a quest. A Lancer can become a Dragoon by equipping the Soul of the Dragoon item after completing the first quest. The details for this quest are below.


Dragoon is a melee damage dealing job which branches from the Lancer class. The job will deal damage using powerful abilities designed to be comboed with one another to increase their effectiveness.


Actions are skills that the Dragoon can equip to their bar and select to use at any time as long as their timer is available. Actions used in a combo will generate additional damage and effects. All Dragoon actions are exclusive to that job.

As well as these the Dragoon can also equip Lancer actions.


The Dragoon job has the following combos which can be executed. These will give extra damage and effects.


Since the Stormblood expansion for FFXIV, cross class actions were removed and replaced with the concept of "role" actions. Role actions are more generic as they don't belong to specific classes, but instead to roles such as melee DPS, magic DPS, healer or tank. The Dragoon can equip up to 5 of these.


From the Stormblood expansion PvP was revamped significantly and you can no longer use PvE actions during PvP battles. That means all of the actions above you can no longer use in PvP. Action Points (AP) were also removed. While some of the dedicated PvP actions do have the same name, they will have different potencies or effects. Below are the PvP actions that are unique to the Dragoon. There exists even more PvP actions and even traits but these are not unique to the Dragoon. You can find these further down the page.


The best equipment for your Dragoon constantly changes depending on what was added in the latest patch so it is important to do your own research on top of this guide. We have broken the equipment down into tiers in order to give some indication of what you can use before you get up to that item level tier.