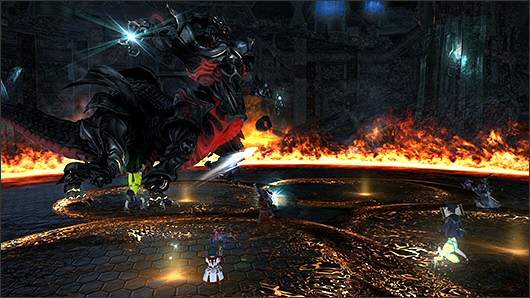 Ultima Weapon was added in patch 2.0 of the A Realm Reborn expansion.

Ultima Weapon becomes available at level 50 as part of the "The Ultimate Ballad" quest, which is given by Alys - Mor Dhona (X:21, Y:8).

The trial has a minimum ilevel of 61 to enter and rewards you with:


Ultima Weapon was first seen in the story dungeon The Praetorium and returns for this hard mode battle in 2.1.

This fight is fairly difficult if you have players in the party who are new to the fight, and this can make winning via the duty finder difficult. Like with all difficult fights it is best to use the DF to help you learn the fight, followed by more experienced parties via the party finder or with your free company.


For this fight it is recommended that you take the standard party setup of two tanks, two healers and four DPS jobs. Two tanks is a requirement for the fight because there is a tank swap mechanic. You should tank swap at three stacks, because after reaching five the tank will die and four is a bit risky. You should also select a bomb person so that everyone goes to the same bomb in one of the later phases. More on that later.


Garuda will appear in the centre of the arena and use an AoE that will cover a large part of the arena. Ultima will use Vulcan Blast, which is a knockback attack that can knock you into Garuda's AoE. You will also have to dodge Garuda's tornado that forms a ring around the outside of the arena. To do this simple stand towards the middle. Be careful not to get caught in anything and this phase should be fairly simple.


Phase 2 begins with Titan's Geocrush, which will deal a lot of damage if you are not close to the edge of the arena. The main thing to be aware of in this phase are the Weight of the Land attacks. These are circular plumes that deal damage if you are in them when they explode. They come in pairs, with the first being in the outer area and the next being towards the centre. You should dodge using an in-out motion.

Tank Purge is another attack you need to be aware of, but this is more for the healers. It will deal around 2500 damage to everyone in the arena. The best way to deal with this is to have everyone but the tanks stack afterwards for an AoE heal.


Ifrit will appear and use his familiar Eruption, Radiant Plume and Crimson Cyclone attacks. The more dangerous attack are his Eruptions. If you get targeted by an Eruption you should run towards the outer wall of the arena and then circle around it. He will cast Eruption on you four times and it is important to not trap anyone else in them. Two players will be running eruptions at the same time.

For his Radiant Plumes you will have to dodge two sets of them consecutively. During the second Ifrit will do one of his Crimson Cyclone attacks which is a dash across the arena. For this reason you should avoid standing in the centre of the arena.


Now that the three primals have had their turn and disappeared, the rest of the fight is more about Ultima Weapon attacking you himself. There will be a few mechanics to be aware of and the fight begins to get difficult towards the end of the phase.

The first thing you will notice are orbs that appear with lines between them. They come in pairs and move towards each other. You must get rid of them by running into one of the orbs on each pair. This will cause it to explode and deal damage to the group but it is better than letting them touch as the explosion will wipe the group.

These orbs will appear throughout the final phase and it is important to have the group moving towards them as a unit. This is why you designate someone to be the bomb person, to lead the group into them.

The final set of orbs is the most difficult; there will be four pairs of orbs pointing diagonal towards each other. It is at this point that the tank should use the level 3 limit break as the group will need the protection from all of the damage they are about to take from the explosions. If the level 3 limit is not available you can sacrifice a DPS or two to go into the explosions solo.

Between the pairs of orbs there will be other mechanics taking place. Magitek Bits will sometimes cover the outer wall of the arena and will shoot lasers across the arena. These need to be killed as quickly as possible and people need to dodge the lasers.

Another mechanic to be aware of are the Magitek Rays. This is the attack from The Praetorium where green lines will point in a direction on the ground before the line explodes. This is simple to dodge.

Airships will also be called in, similar to the airship attack during the second Ultima Weapon fight in The Praetorium. The further you are away from where the airship crashes into the ground the less damage it will do.

You have 10 minutes to clear the fight so it is important to not have too many people dying as this will slow down DPS.


Below is a listing of all loot for the trial Ultima Weapon.