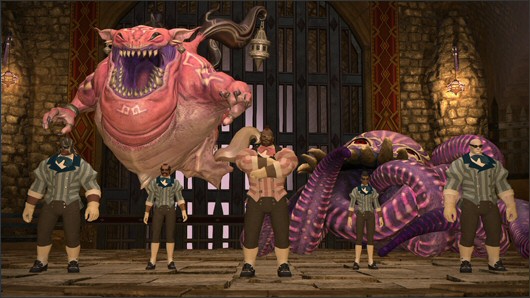 The Dragon's Neck was added in patch 2.4 of the A Realm Reborn expansion.

The Dragon's Neck becomes available at level 50 as part of the "The Coliseum Conundrum" quest, which is given by Briardien - Ul'dah - Steps of Thal (X:14, Y:10).

The trial has a minimum ilevel of 80 to enter and rewards you with:


The Dragon's Neck consists of a fight between Ultros and Typhon. These guys have appeared in the Final Fantasy series and now mark their appearance in FFXIV.


The fight is tuned to be completed by a DF group after a number of tries, but it can be tricky at first. The fight requires two tanks and while it can be solo healed with 5 DPS it is easier to just stick with the standard 4/2/2 party setup. If you go via DF you won't have a choice anyway and it's rare that you will see a PF group for this.

A couple of interesting mechanics are in play for the duration of the fight. If you fall off the edge of the arena then you will be stunned for about 5 seconds, after which you can jump back on. If all party members fall off together then the fight is over and it is a wipe. The second is that if Ultros or Typon get more than 10% HP apart then they will link and share their HP meaning that you can't kill just one of them to make the fight easier. They must both be down to at least 10% before one of them can die.

Don't be put off if it takes a number of tries for the group to get past phase 1 because phase 2 is easier.

Now that we've covered the basics, let's go over the two phases.


Phase 1 consists of one main mechanic and failure to complete the mechanic correctly will result in a wipe. After around 30 seconds of fighting all DPS members will be turned into tiny Imps. While under Imp status you cannot use any of your normal abilities. Instead you will only have the ability Imp Punch, which works from a separate hotbar. This does a small amount of damage.

While under Imp status you must get in front of Ultros and take the Aqua Breath attack that it uses. This will apply a stack of Wet Plate to any Imps hit by it. The attack looks like bubbles coming from the monster. After 3 rounds of Aqua Breath Typhon will begin to glow. It is at this point that all DPS members should attack Typon with Imp Punch. If your party hits Typhon with a combined total of 8 or more stacks of Imp Punch then you are good, otherwise the party wipes. Hitting Typhon with Imp Punch will remove the Imp status.

There is then a very short DPS period (shorter than that at the start) before the DPS players are once again turned into Imps. The same strategy applies this time, except the DPS have to take extra care to avoid wind that is spewing from Ultros' sides and behind. Getting hit by it will blow you off the arena, which will stun you and cause you to miss stacks of Wet Plate. It will also make it difficult to get back up and into position. Learning to position yourself correctly in the first place is easier.

While taking stacks of Wet Plate the DPS should also be careful not to get hit with Megavolt - a circular ground AoE that is centred on a DPS party member.

Once you successfully pass two rounds of Imp status you are into phase 2 and never have to deal with that mechanic again.


Phase 2 is surprisingly easier to learn than phase 1. As mentioned there is no Imp status but there is one dangerous mechanic that has to be dealt with correctly.

The mechanic is called Snortsault and it is an ability Typhon uses on occasions throughout the phase. When he uses it wind will knock back everyone in the arena just a few steps. The catch is that he will use it about four or five times in succession. If you are not standing near the centre of the arena when he uses it you will likely be knocked off. You should help yourself by running towards the middle of the arena during the knockbacks.

As this mechanic is the most important in the phase you should aim to prepare for it by standing near the middle for the entire phase.

The rest of the phase is simple. You will see red circular markings on the floor that indicate damage is about to occur there, you simply step out of them. As long as you focus all your efforts on the Snortsault mechanic and keep out of these ground AoEs you will win the fight.


Upon completion of the The Dragon's Neck battle you will be given a chest with the Ultros minion.