Ramuh (Hard) was added in patch 2.3 of the A Realm Reborn expansion.

Ramuh (Hard) becomes available at level 50 as part of the "Levin an Impression" quest, which is given by Papalymo - The Waking Sands (X:6, Y:5).


Ramuh is a new primal that was added in patch 2.3. The fight this page refers to is the Hard Mode version of the fight that takes place within the main scenario. Like with Leviathan Hard Mode it is not intended to be a difficult fight and you should have no problems beating it first or second try. Extreme Mode exists to challenge the best players and is harder than the earlier extreme mode fights. 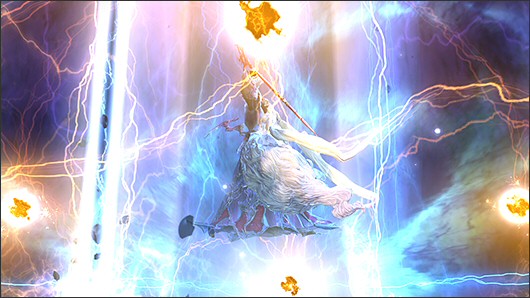 There are two main fight mechanics in Ramuh Hard Mode that you should try to understand. Neither are difficult to deal with however some communication may be required.

Chaotic Strike: Terror will be placed upon a random player and he/she will be unable to move or attack until it wears off or another player takes a thunder circle to them. Thunder circles are the thunder rings that occur around random targets. They deal damage but must be used to free a player under Terror because healers cannot remove it.
Rolling Thunder: Two players will be linked together via a tether. One of the players must run across three of the orbs that litter the battlefield in order to break the tether.


For the first 40% of the fight there is not a lot to do other than dodge the AoE around Ramuh (easy if you are a ranged player) and DPS it down. You should also avoid standing on the orbs that are appearing as you will need them later.

While killing the Grey Arbiter adds you should take care to avoid the damage attack they fire across the arena. You should also watch out for players receiving the Terror status and free them as needed. It helps if these players call out that they are under that effect.


After Judgement Bolt be prepared for another Grey Arbiter that will appear later in the fight. It should not cause any issues but as with all adds kill it quickly.

The main thing to be aware of in this phase is that you will have to deal with the Rolling Thunder attack mentioned earlier. It is important that players do not waste the orbs by stepping on them when they are not needed or by stepping on too many.