Leviathan (Hard) was added in patch 2.2 of the A Realm Reborn expansion.

Leviathan (Hard) becomes available at level 50 as part of the "Lord of the Whorl" quest, which is given by Eynzahr Slafyrsyn - Lower La Noscea (X:24, Y:33).

The trial has a minimum ilevel of 60 to enter and rewards you with:


Leviathan is a primal that was added in patch 2.2. The fight this page refers to is the Hard Mode version of the fight that takes place within the main scenario. It is not a difficult fight and Yoshi-p has stated it was tuned towards a group beating it within a few tries, with it having around the same difficulty as the Good King Moogle fight. Extreme Mode exists to challenge the best players and is harder than the earlier extreme mode fights. 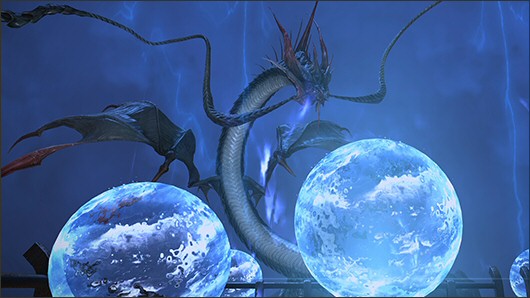 Despite the fight being called "Hard Mode" the fight is fairly easy compared to hard modes of Ifrit, Garuda and Titan at their time of implementation. The strategy is simple. Attack Leviathan's head if you are a mage or melee, and attack Leviathan's tail if you are a BRD. Kill the adds as they spawn (they will not cause any problems) and watch out for Leviathan's dives and slams.

Dive: This is the attack that goes from north to south and back, or vice versa. The way to dodge it is to first take note of which side of the arena Leviathan is at and ensure your camera faces that direction. Then move to the other side (east if the attack starts nearest the west for example) until the attack is over.

Slam: Slam is the attack where the arena will tilt and move players to the other side. Your goal should be to get as far away from Leviathan as possible. This attack isn't dangerous in hard mode but it can knock you out of the arena in extreme mode so it is important to understand how it works.

The only other thing you should be aware of is the Tidal Wave mechanic. When four Gyre Spumes appear in the arena you must kill them as soon as possible. You will then be able to erect a barrier to avoid the high damage from Tidal Wave.