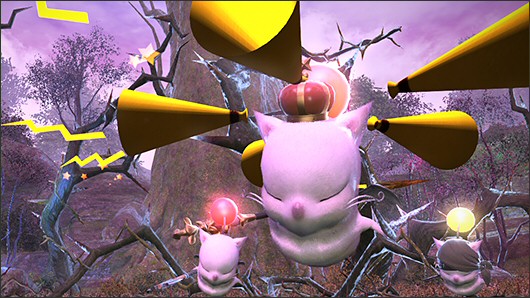 Thornmarch (Hard) was added in patch 2.1 of the A Realm Reborn expansion.

Thornmarch (Hard) becomes available at level 50 as part of the "You Have Selected Regicide" quest, which is given by E-Sumi-Yan - Old Gridania (X:6, Y:10).

The trial has a minimum ilevel of 54 to enter and rewards you with:


Thornmarch is the Good King Moggle Mog XII fight that first appeared in patch 1.2 of the original FFXIV. It reappeared in 2.1 of A Realm Reborn as part of the story.

As the fight is part of the main scenario the difficulty is not that high. It was actually nerfed in patch 2.15 as Square Enix felt it was harder than a main scenario quest should be. For those wanting a challenge then Thornmarch Extreme arrives in patch 2.2. Below is a detailed guide for the Thornmarch Hard mode fight.


For this fight it is recommended that you take the standard party setup of two tanks, two healers and four DPS jobs. There are no advantages over taking certain jobs over others but like most things ranged jobs will have it easier.


There are eight moogles to defeat in this fight, with one being the Good King Moggle Mog XII himself. It is important to understand the differences between each of them as this allows you to set a kill order. You can then mark them with numbers to help the party know which ones to go after in which order. These markings will stay for the duration of the fight. The moogles are described below:

Whiskerwall Kupdi Koop (PLD) - This moogle will use an attack called Spinning Mogshield, which is an AoE centred around himself. Also capable of charming players.
WoolyWart Kuqpu Kogi (RNG) - Be ready to run when you see a crosshair above your head; it means WoolyWart is about to hit you with Eagle Eye Shot. This is a highly damaging attack.
Pukla Puki the Pomburner (BLM) - Capable of casting Flare but players are able to stun and silence it.
Pukna Pako the Tailturner (THF) - This guy will randomly target a player and then run up to them and start attacking.
Ruffletuft Kupta Kapa (WAR) - Be ready to dodge his Steel Cyclone AoEs.
Furryfoot Kupli Kipp (WHM) - This guy will cure other moogles as well as use Holy.
Puksi Piko the Shaggysong (BRD) - He will buff the attack rating of other moogles via a song, and is also capable of doing AoE damage centred on himself.
Good King Moggle Mog XII - He will inherit an ability from each moogle once it has been defeated. He will also use Momento Mori during the phase change and throughout phase 2. The damage is dependant on how many moogles are alive. You need to kill as many as possible in phase one to reduce this damage.

The group should use their damage buffs at the start of the fight and aim to kill the PLD before the RNG and BLM moogles appear. Using your damage buffs here means they will all be ready again in time for phase 2, especially those on three minute timers.

Once the PLD has gone focus on the BLM and be ready to interrupt its Pom Flare. The third target is the RNG, followed by the WHM that spawns in the third group of moogles. You are now left with the THM, WAR and awaiting the BRD to spawn. Focus on the THF, followed by the WAR and then the BRD.

You may not kill all the moogles in phase 1 and this is fine as long as you kill four of them. Any less and you risk a party wipe with the Momento Mori special attack the Moogle King does. Someone in your party should be marking out a kill order as the fight goes along. The kill order is more for phase 2 since you have little choise as to which order you kill them in phase 1.


At the beginning of phase 2 the main tank should take the Moogle King to the north end of the arena while the off tank should pick up the PLD and WAR moogles. The healers should split between each tank and ideally the WHM should be the one healing the DPS.

The DPS should firstly focus on the BLM, using their damage buffs to kill it as soon as possible. Pom Flare should be interrupted before it goes off. Upon defeat the Moogle King will then hit the arena with meteors. Simply run out of the AoE circles to avoid getting hit.

Due to the high risk of a wipe here the PLD is second on your kill list. The PLD is capable of taunting the nearest three players and you really don't want your healers getting taunted because you cannot move or use skills while taunted. So healers need to keep their distance and DPS need to ensure there are three close enough to be the ones taunted. Healers can remove the taunt debuff with Esuna and Leeches.

The third moogle on your kill list is the WHM. You don't really want him healing the other moogles too much do you? Watch out for the Pom Holy the Moogle King casts after the WHM death; healers need to be ready to give an AoE cure. Similarly, you don't want the BRD keeping that attack buff on the other moogles so you kill him fourth.

Now it's just a case of picking off the remaining moogles in the kill order above until you are just left with the Moogle King. At this point you have done the hard work, just DPS down the Moogle King and get your win.


Below is a listing of all loot for the trial Thornmarch (Hard).